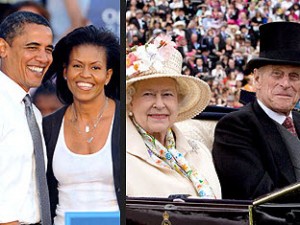 This week saw visits from the Queen of England and
from President Obama and his wife Michelle Obama
or as he affectionately put it O'Bama *giggle*
The Queen's visit is one of the most historic events I will probably ever witness in my lifetime.
I know it is not that far across the Irish sea to Buckingham Palace
but the symbolism that drenched her visit could never be measured in something as simple as distance or weight.
For the first time since 1911, the reigning monarch of Britain/United Kingdom visited our shores.
And oh what a visit.
There were smiles and giggles 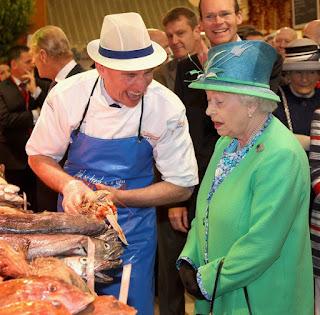 Especially when she told the fishmonger pictured above that she had never met a man with prawns as large as his. And quickly realised what she had said 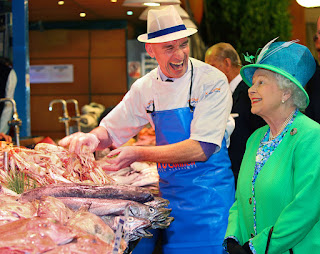 There was her lovely speech in which she addressed the guests and our President in the Irish Language as friends.
She travelled much of the country
saw the sights and
All in all it was a lovely visit.
There were representatives from North, South, east and west. From both sides of the Irish Sea.
Many people have spoken out about how the Queen should have apologised for the past.
My opinion differs greatly.
There were people on both sides of the troubles who did wrong.
No country should have to apologise for the atrocities carried out by the other.
What she did say was poignant.
What our President said was superb.
I think we should consider the whole thing a success and be proud of the maturity that our country exuded throughout her visit.
Then we had President Obama.
Good old Barack.
It was a flying visit.
Literally.
But again it was great.
He managed to visit his ancestoral town of Moneygall
To the house where his family actually came from.
He met his long lost cousin Henry
who as a result of being his eight cousin is now
affectionately known as Henry the Eight!
He embraced the Irish side of life as best he could 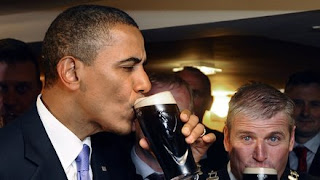 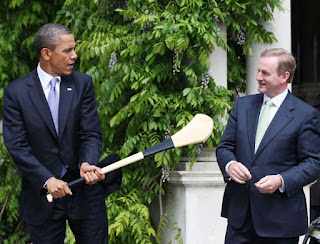 For the non-Irish speakers among you it translates as Yes We Can!
Sound familiar?
Barack brought a bit of craziness out in all of us.
Craziness that was badly needed in my opinion 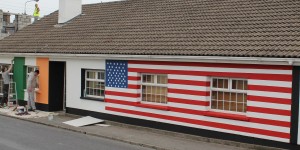 And hilariously painted houses.
But most importantly, he brought a smile to a lot of people's faces/
For a long time all that we have seen and heard is pure negativity.
People's lives consumed with fret and worry.
Don't get me wrong, the problems are still here.
But for a small snippet of time
People enjoyed themselves
They became proud of our lovely little nation again.
We even had to nod in agreement at what a good job our Taoiseach Enda Kenny did this week
I think it is the first time we agreed on a politician's actions in years! 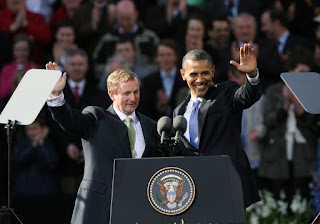 Even if he did lift half of one of Obama's speeches at College Green !
(it was a tribute apparently)
I personally enjoyed a few days of happier people
it made my job a lot easier for one!
Rather than complain my customers sang the praises of all those involved in the visits this week.
It was super!
I wish every week could have same buzz about it!
My week was not only about celebrity visits however.
As you know from my entry last Tuesday
we spent some time with James' wonderful sister and her family in the UK 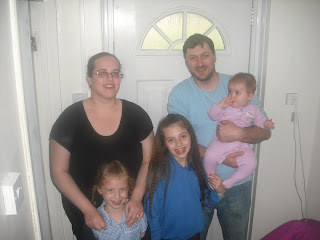 I am not eloquent enough a writer to tell you how wonderful the five people pictured above are.
Not only are they a beautiful family, they are beautiful people with beautiful hearts.
We had such a wonderful time with them and miss each one of them terribly.
I don't know if I can ever thank them for allowing me to be such a big part of their lives
and enable me to share with James such an important part of his.
Thanks Liz, Steve, Katie, Emma and Isla.
One thing that came about from this visit was the girls stopped giving a crap if I wanted to be called Auntie or not.
Somewhere along the way they just went with it.
I love it!
Auntie Louise has a nice ring to it.
If you are reading this little brother -hint hint!
As a result of the visit I am now addicted to the facebook game Gardens of Time

Thanks Steve!
And I'm becoming a huge fan of Yankee Tarts 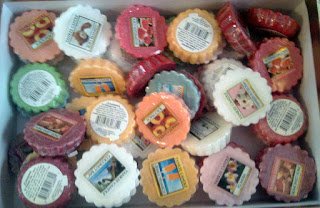 Thanks Liz!
Alas it is now time to return to the realms of reality.
At the moment my reality is the Leaving Cert.
My free time is now teaching time.
Not as fun as it sounds but definitely worth it
Each day sees James grow in confidence
in his abilities.
I am so proud of what he is achieving.
He is truly amazing.
It has however made me decide to do my PGCE next year.
Teacher O'Dwyer has a ring to it.
Criminology will always be an interest of mine
but for the moment it will have to take a back burner as I follow this new avenue of dreams/
Until the next time folks...
Is Feidir Linn!