April 24, 2011
I had been trying to decide on what to review for sometime when all of a sudden some gastronomical delights tickled me so pink I felt a divine hand had chosen my topic for me.
What nirvana of yum could receive such gushing I hear you ask?
Let me tell you.
The Gourmet Tart Co. of Galway.

How it came about was, I was strolling home from work and I had just dealt with a customer who made Damien from the Omen seem like a cute little rascal.
I was emotional, tired and looking for something to spoil myself with.
As I walked past the Gourmet Tart Co. on Abbeygate Street I had a sneaky peek in the window and decided to get myself a little cake.  So I picked up a passionfruit and cassis mousse to take home with me.
I think that afternoon I went to passionfruit heaven.
The little cake was moist, sweet and without trying to sound like a gushing commission earning gimp, delightful.

So I decided to put the Gourmet company to the test.
I live close to the store on Henry Street
so armed with lots of smelly cheeses, honey and hummus I went one afternoon after work.
I asked for some advice on what bread would be nice with my above ingredients.
I contently left with a beautiful French Baguette and some Pain of some sorts.
I will admit that I can't remember the name the girl gave me for the second bread but to be honest, I not that bothered. My fingers will point towards it in the future.
The bread was divine.
It was late in the evening so I wasn't expecting the bread to be in the best condition as it had been out all day, but I was pleasantly surprised. It was nice and crisp and perfect for my smelly cheeses! 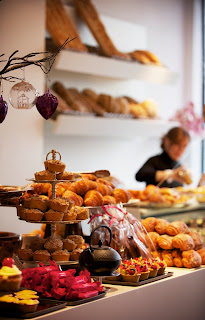 So cakes/mousse were covered, bread was covered, I decided to try out the lunches.
Lunch number one was the value meal.
I had a smoked salmon, rocket and horseradish sandwich, a box of grapes (though I could have chosen crisps instead) and a bottle of homemade lemonade for 5 euro. Again it was lovely. The sandwich was so fresh I would have believed that it was made there and then for me if I hadn't actually picked it from the fridge myself but the highlight of my lunch was the lemonade.
If you do anything this week it should be to go get some of their homemade lemonade.
It was what I imagined the children from Enid Blyton's books spoke about on their picnics. It was slightly bitter, slightly sweet and I'm going to have to confess, I've had a bottle of it every day since that fateful meeting! Yum Yum Yum!!!

Lunch number two was from the salad bar.
There are tubs of different sizes, you take your pick and pay by size.
I had the large one for 5 euro and filled it with lovely runner beans and couscous and I even threw in some roast potatoes to sample them. It was yum but I will admit I was hungry again by mid afternoon.
Of course that is not the fault of the Gourmet Tart Co. merely a reflection on the fact that I am a sandwich girl!!
So how do I rate the Gourmet Tart Co? Well, to use my favourite word, the experience was pretty mega.
I will be getting my lunch there more often and I will also have to feed my new lemonade addiction.
I hear there is now even a restaurant open in Salthill.
The boy has a birthday coming soon.
I think I know where I will be taking him!
Nom nom nom....
So to sum up.
Taste the lemonade
Taste one of the mousse'
And buy yourself some nice smelly cheese, honey and get a big french baguette.
You won't regret it.
For more details, here are their details. nom nom nom.....
Lemonade.....