December 06, 2010
The last thing that made me cry was a book that I was reading.
The name of the book was Shot In the Heart
written by Mikal Gilmore. 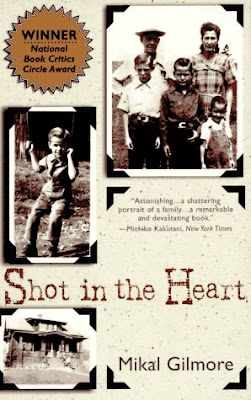 Mikal Gilmore is the brother
of the infamous murderer Gary Gilmore,
a man who killed two young mormon men in cold blood in the 70s.
His infamy came more from his insistence that his death sentence be followed through at a time when the death sentence was given in theory rather than in practice.
It was a horrible story of abuse and violence
It was not Gary Gilmore story that made me cry.
It was a particular moment in the book that did that.
Mikal and his eldest brother Frank meet for the first time in a decade.
They separated after the death of their mother, Gary and their other brother Gaylen.
Then they have this moment where they embrace.
The emotions of the previous decade spill out of the pages in a few simple lines.
These two men who suffered due to their circumstances
Who lost their family
Their place in society
Well they found each other again.
And it was beautiful.
In a world where they found themselves answerable for their brother's heinous crimes
they had lost a part of their own identity.
In this one moment they found it again.
They found each other.
I think I could relate not with the series of events but with a lot of the emotions discussed.
Thus the tears.