January 14, 2016
I had decided not to blog this year.
Last week I mentioned it on FB to my pal Claire when she commented on my lack of blogging.
And people got a bit grumpy with me,
and some got a bit concerned,
about my wellbeing, as I didn't want to blog.
I blushed a deep shade of red when I realised how many people read the Life of Lu!
So, thank you for your lovely messages.
I assure you I am fine,
And I shall resume the occasional blog as requested :)


This week was a week of shocks with the passing of David Bowie and Alan Rickman.
While I loved David Bowie and his music. In fact, my favourite Christmas song is one of his.

It was the death of Alan Rickman which tugged on my heart strings.
I have had an infatuation with him since I first saw him on horseback in Sense and Sensibility,
and heard him utter the beautiful name 'Marianne'.
His voice was so powerful, so manly, so beautiful.
I actually decided that day that if I ever was fortunate enough to have a daughter I would call her Marianne
Naturally I would pretend that I was calling her after my grandmother,
but really it was because of Alan Rickman. 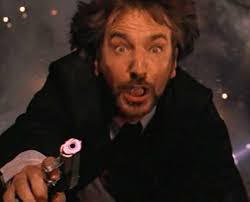 But
Every cloud has a silver lining,
and whilst it is sad to think that the world is without the musical wisdom of Bowie, or the dramatic brilliance of Alan Rickman, at least we have their legacies to listen to and watch for many years to come.

*It has literally just been reported the Celine Dion's husband died today too, also from cancer. Such a horrible disease, so many questions that we need to learn the answers to*

A much happier event occurred this week.
I was introduced by my housemate to my first cup of stovies.
Yup! Real stovies.
AND I LOVED THEM.
They look horrendous.
They smell fabulous.
They taste divine.
Seriously.
Try them.

I also pulled some Christmas crackers with my housemate last night. Just for the craic of it.
I got a brilliant joke.
What do you call a three legged donkey?
A wonkey!

I laughed a lot.
Almost as much as the time a pal of mine told me that if there was one thing he learnt from the Christmas service he attended with his family,
is that he has to go and 'practice his emoji'.
It seems Christmas services have changed since I last went to one!!!

Other than that there is nothing new in the Life of Lu.
Think big,
Dream bigger,
and chat soon amigos.