June 01, 2013
Happy June!
It is hard to believe that we are into month six of a twelve month year isn't it!
The last month has been pretty crazy. Crazy and fabulous.
So what has been happening in the life of Lu?

-Well, I got a promotion! I'm in training at the moment and while the job is throwing plenty of obstacles at me, I am enjoying every second of it! It is always great to meet a new bunch of people, and those of you who know me well know how much I like to challenge myself and be challenged. All things going well, I will be fully signed off by the end of the summer. If the year so far is anything to go by, then the year will fly. Foolishly fast!

- A lot of exciting things happened last month. Do you recall I entered a competition of Red Nose Day wearing all my Red Nose gear? 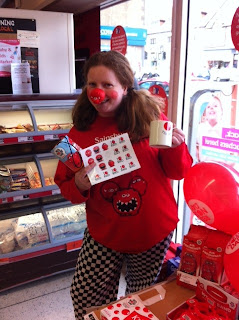 Well, I only frickin' won a malteasers hamper for my efforts! Here, have a look!

Naturally, James discovered my collection rather quickly and lived on a diet of malteasers for a week or so... whoops!

- If that wasn't fun enough, I also won tickets to be in the audience of a Channel 4 show, 'What's Cooking?'

It was super!
I flew down to London, and took a quick detour to Bedford where I met James' sister and some of her family. I was so excited when her two year old daughter Isla called me by my name as I have only been to Bedford two or three times since she has been born.

As part of my prize I stayed at a lovely wee hotel in London in an area called Stratford. Quite close to the hotel was the Westfields centre, which was created for the Olympics. It was amazing. It was one of those moments where I wished James was with me as I know I didn't appreciate the architecture nearly as much as I should have done.

Above all things, the trip reminded me of how much I love London.
It is such a lovely city!

- As if that wasn't exciting enough, one of my favourite people in the entire world came to Edinburgh last weekend to take part in the marathon. David and I have been friends since we worked together in Subway while at uni. Our friendship is one of those ones where we don't see each other for an absurd amount of time, but then we do meet and it feels as though we saw each other the week before.
We went to Frankenstein's, a gothic style bar in the city centre. The gimmick in the bar is that at 6pm and 12am Frankenstein awakes. I have seen it happen quite a few times but it is always fun watching it with a newbie! The lights go down, creepy organ music fills the bar and Frankenstein emerges from the ceiling. He then wakes and sits up with a groan. It is fun!

In true Scottish style we finished off the night with chip rolls ie. bread baps stuffed with chips. YUM!

So, summer is starting. In Edinburgh that just means one thing. FUN!
Expect more updates as James and I take Edinburgh by storm!
Enjoy your bank holiday folks!